Our Most Precious Assetts Are Our Volunteers

When we first decided to embark on the Rams Island Heritage Project in 2003, we decided that where ever possible we would use our Volunteers to undertake the miriad of tasks involved in the project.This involved tasks that ranged from jetty construction, to mowing grass, to paperwork, to boat crewing to fence building, to making lunch and offcourse welcoming visitors, plus all other tasks inbetween.
This has sometimes caused problems with other organisations who have volunteers plus fulltime staff who do not realise the satisfaction we get when we can boast we are all volunteers. As a Registered Charity we can truthfuly state every penny of every donation we get goes toward our charitable projects. We have no wages bill.

Our plans for the Island involve the use of skilled and unskilled volunteers where possible to attain our stated aims and objectives. We need volunteers young and old, able-bodied or disabled for a multitude of tasks large and small i.e. boat crewing, fundraising, clearing and rebuilding paths, bird watching, tree planting, invasive species removal, volunteer warden and general conservation work.

If you are interested in any of these tasks above and wish to join us in this project as a volunteer email us, text us or whatsapp. We are always looking for volunteers to join us in a hands on approach. Skilled or unskilled or disabled are welcome. New skills can be learnt on our project.

phone or text or whatsapp 07715368050 or email volunteers@ramsisland.org

Our first task for the Rams Island Heritage Project was creating safe access to the Island for Volunteers, Contractors and Visitors 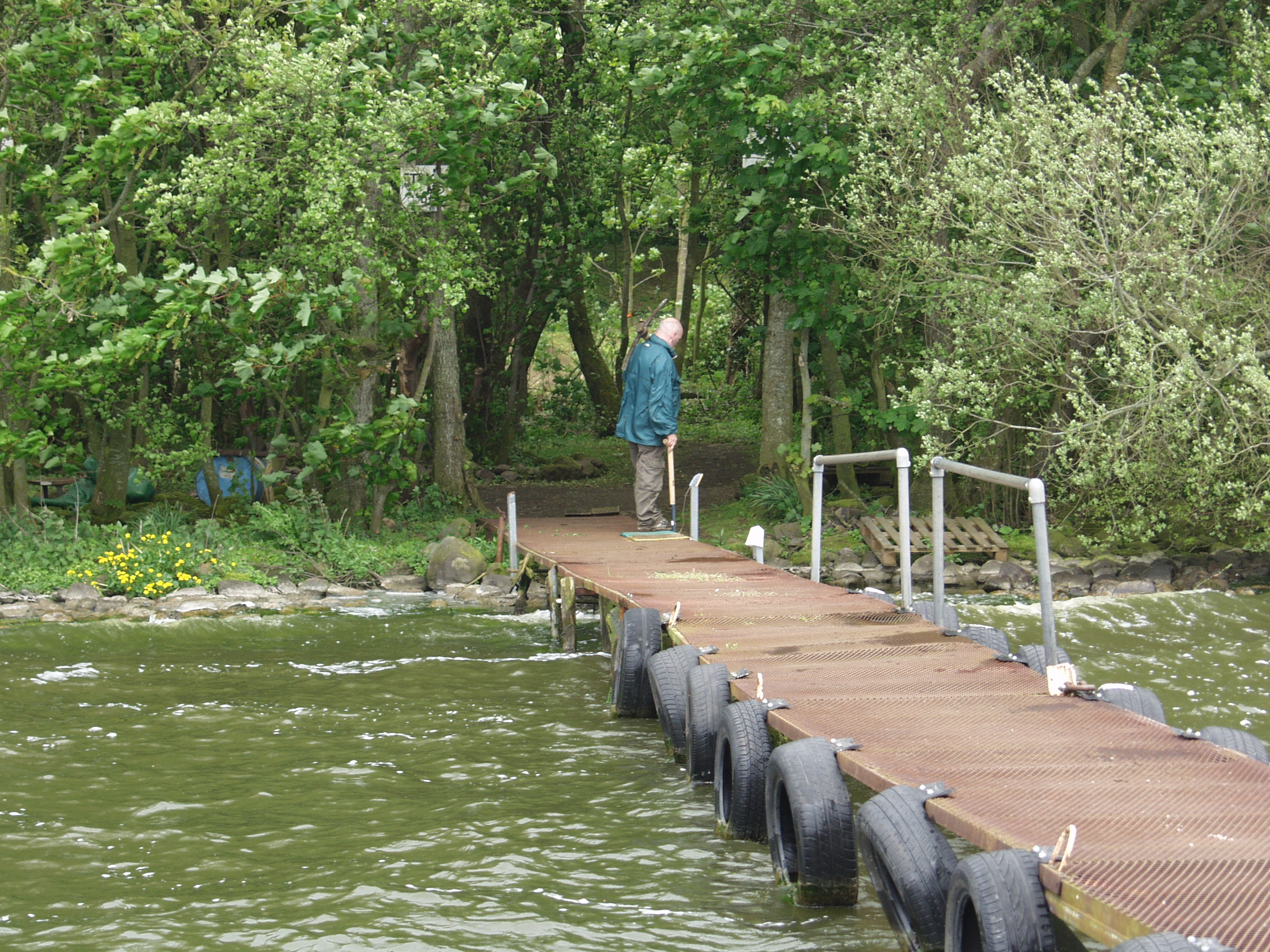 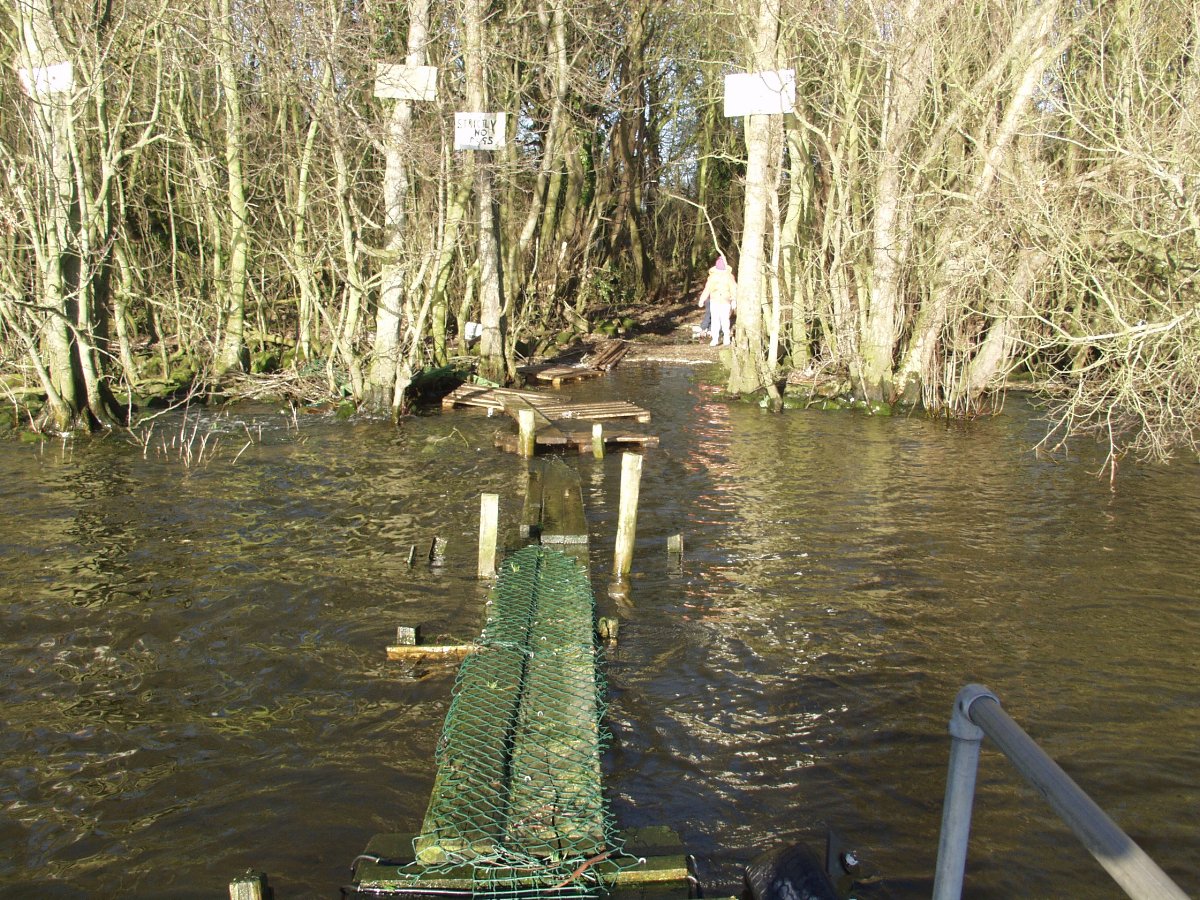 
This task involved creating a temporary jetty in 2004 and with the promise of major funding in the air  plans for a new allweather jetty were drawn up. This process involved  three major elements funding, planning permission and a contractor willing to undertake the work after the tender process. We applied to the Lough Neagh Partnership(LNP) after getting a ballpark price of £170,000 from a contractor. Much to our surprise the LNP told us even though they wanted to fund the access at Rams Island they couldnt afford the £170,000. They quoted a new jetty had been built at Kinnego for £100,000.Kinnego is onshore which makes things a lot easier. However we were instructed to go to tender and hope someone would come up with a price within the £100,000 budget. After the tender process the cheapest price quoted was £165,000 well above the budget. An urgent meeting with LNP, DARD (the purseholders) and ourselves was called. DARD told us we should have applied for more money and when told we did !! They hadnt much more to say on that subject.
We were then asked had we any ideas to save the situation. We told them that the only possible way forward was to do the donkey work ourselves and to use the services of specialists when we don’t have the skills within in our volunteers. Upon analysis this has proved surprising as we have more skilled volunteers than first we thought.
To do the various elements of the project we needed basically five things;
1. Volunteer Labour
2. Materials
3. Tools & Equipment
4. Specialist Contractors
5. Skilled Supervision(overseeing engineer)
To our surprise DARD agreed to all this and were very adamant about the supervision by a consulting engineer. This element wasn't a problem to us as we had already used a consulting engineer in the planning process.
It was tight going for two years getting all the elements into place, buying the equipment, getting the deck made, and getting all the equipment and materials out to the Island. We had to set up camp on the Island with two shipping containers for secure storage and clearing scrub to store all the materials. The pontoon was the lynchpin of the operation, built in two road transportable (3.2 m x 8.5 m) halves, with 8 watertight compartments it  was launched at Toome and towed to Sandy Bay by Sand Barge. It was used to transport materials and equipment from Sandy Bay out to the Island. Once we had 20 tonnes of stone on it in one load although 15 tonnes was a more comfortable load.

At the time we felt that we were being taken advantage off by LNP and DARD (Creating public access to an Island on a Lough where accessable Islands are very scarce for a very low cost).  However the tools and equipment have served us well over the years and turned the situation around to the favour of our volunteers, as we still have all the equipment in a serviceable condition and in use by our volunteers. For example its a lot easier to move a fallen tree off a path with a 3ton digger than doing it by hand. 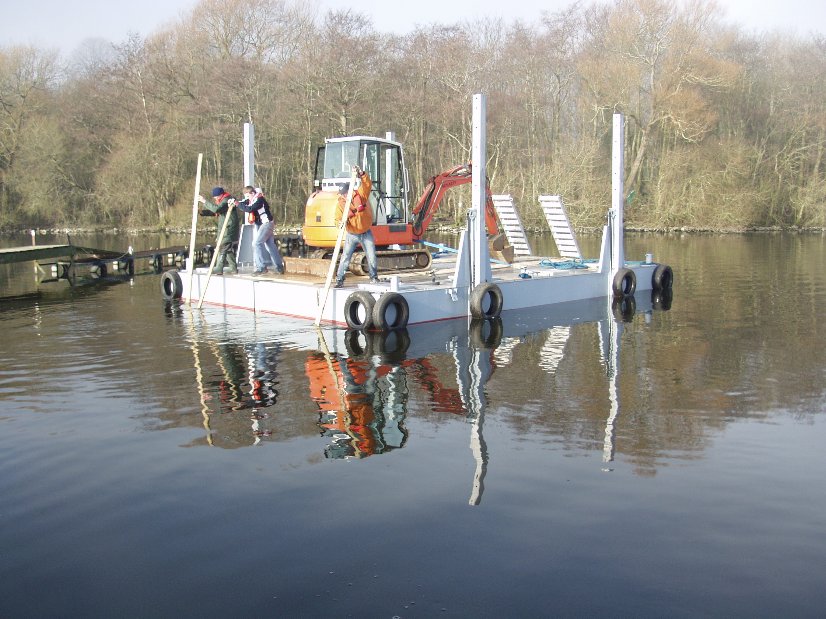 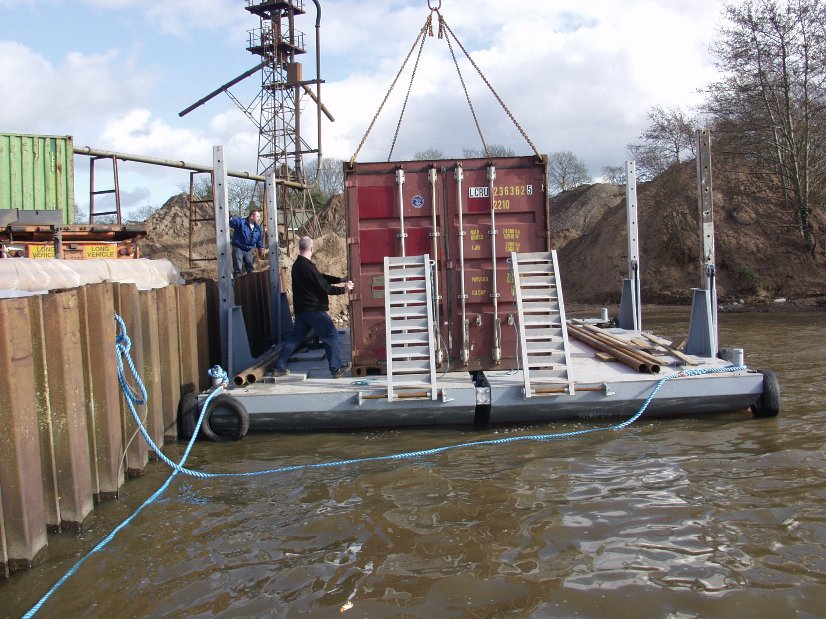 The pontoon in action 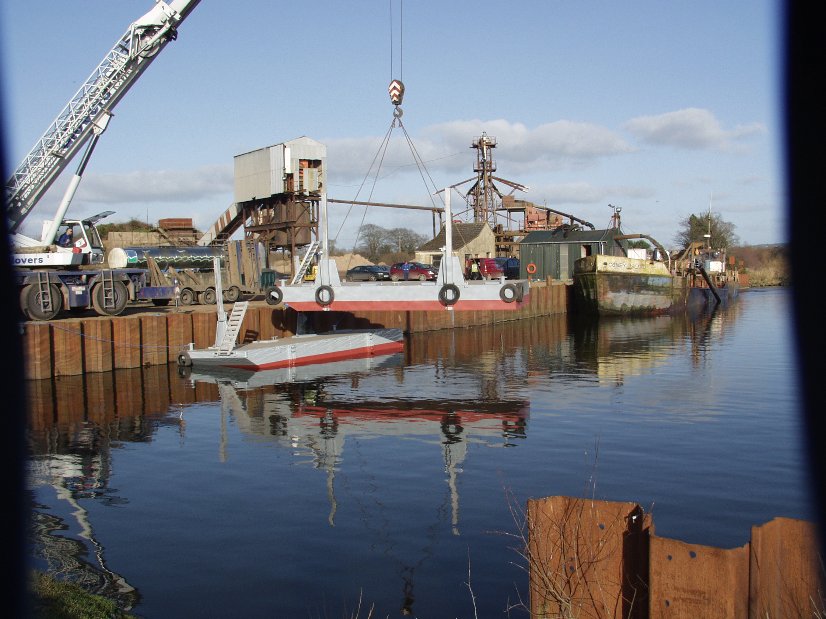 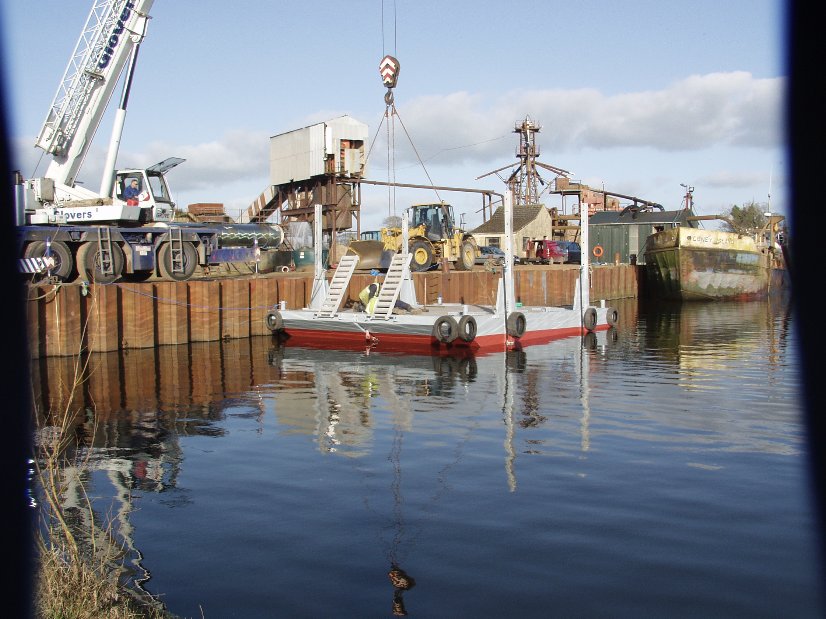 Bolted together ready for work

Towed across Lough Neagh to Sandy Bay to begin work

An early load of gravel for the paths on the Island

Jokingly called "Operation Overlord" the code name for the invasion of Europe, the pictures above show the logistical nightmare involved in the transportation of materials and equipment across a mile and a quarter of open water to Rams Island 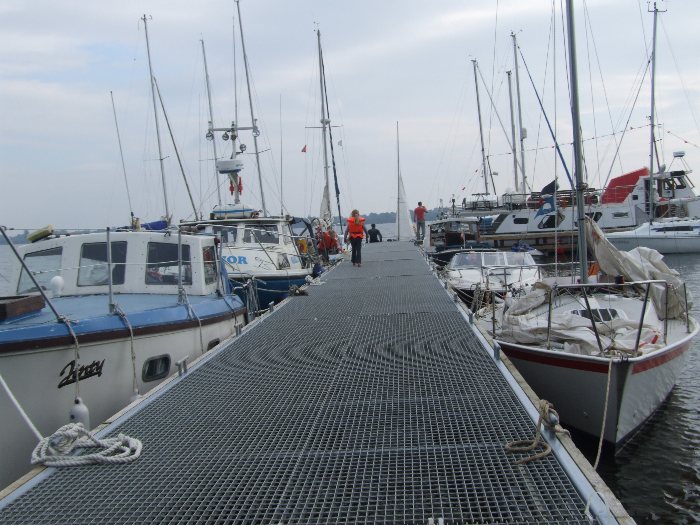 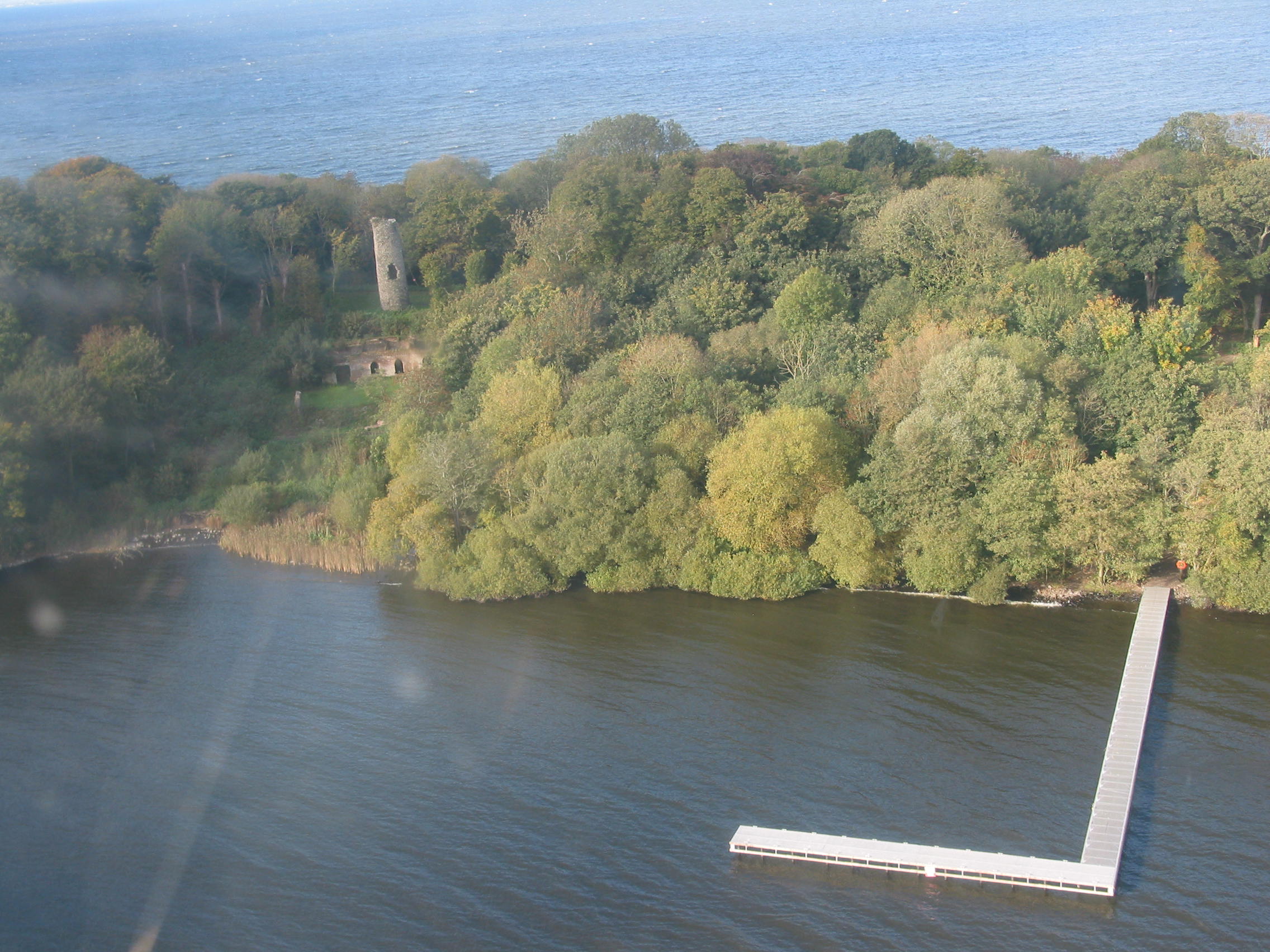 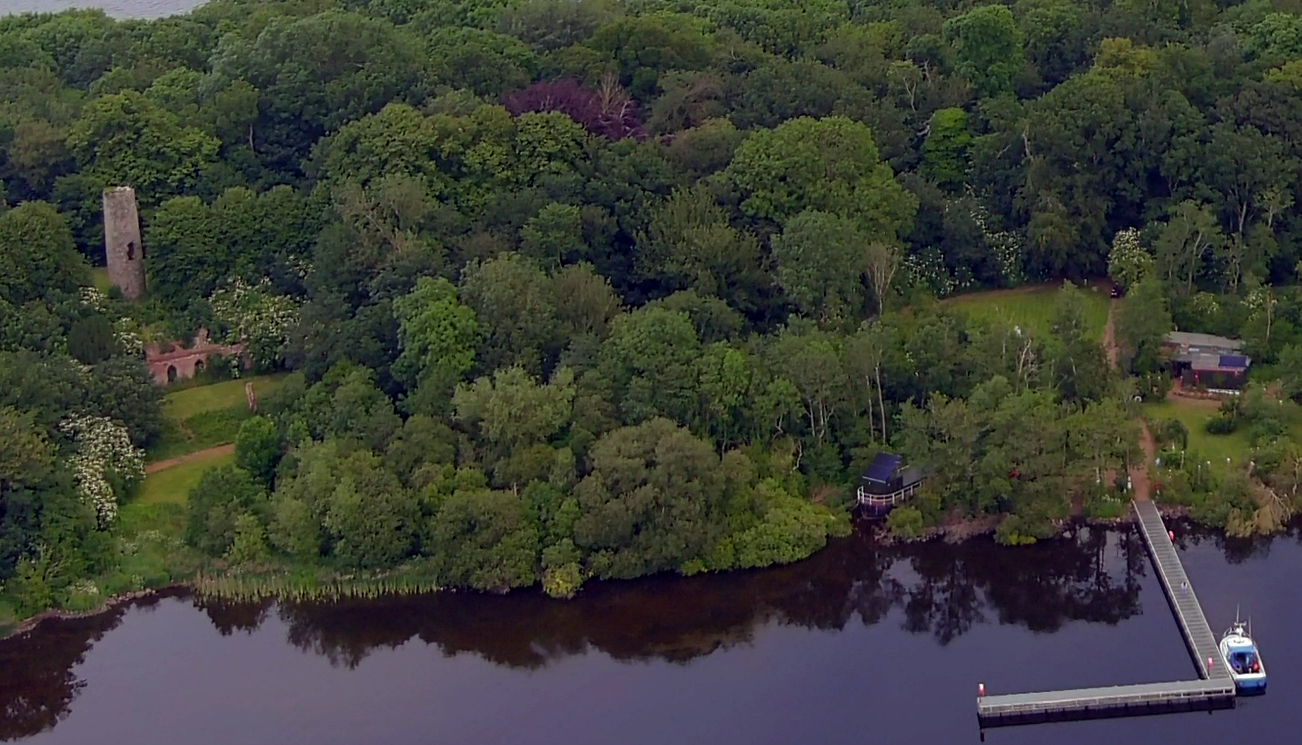 Even though we have the Island in fairly good shape after some 18 years we still have a along way to go. There is always a long list of jobs and projects in the pipeline. Jobs are prioritised with available resources and funding at hand. Health and safety also plays a major role as it does in all walks of life these days.